History of the Village

Bielle probably takes its name from the Roman occupation brought about by Caesar in 51AD and his Lieutenant Publius Crassius.
Mosaics, sarcophagi and marble columns are the remains of this epoch and the name Bielle is derived through successive stages from « vila » :
Vila in 1154
Villa of San Vivien in 1355
Biela in 1614 ( a time of rapid expansion of the town)

In fact a Magister (a sort of Roman ‘prefet’ = a regional town council leader) built the « vila » as the administrative seat answerable to the diumir of Oloron (a sort of super prefet) , who gave his name to the town promoted to the position of « Capduhl » (main town) of the valley.

The Roman influence was not limited to the establishment of an administration but also brought about an economic revolution through the introduction of the growing of cereals (millet, rye, barley) which led to the development of the plain of Bielle whilst the high areas remained pastoral, grazed by cattle.

The decadence of the Roman empire left the way open for invaders of which the Goths were the first.
Under the command of Euric, leader of the western Goths (Visigoths) they surged into Gaule from Spain, from the Pyrenees right up to the Loire.
But Euric’s realm collapsed under the reign of his son Alaric who was defeated in 507 by Clovis at Vouillé.
From the 6th century to the 15th century the descendants of the Goths who hadn’t returned to Spain had to endure the difficult conditions as « cas-goths » (dogs of the Goths) or « Cagots » :
They had no right to a family name which could be passed on
They could only marry amongst themselves
The only work they were allowed to do was woodwork, (carpentry)
They had to wear a red crest on their clothes (a « crestiau »)
They could only enter a church by a special door set apart for them and use a separate font marked with a man’s head
They could only attend mass separated from the other believers
They had to be buried in a separate cemetery 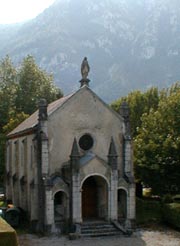 From the 6th century to the 9th century there were successive invasions until the Norman one of 840 to 877.
The later ones came via the Gave d’Ossau ( ie a river) and the inhabitants of the lower valley (Arudy) surged into Bielle to take any vestige of the Roman remains.
Under the command of the young Lord of Béon they resisted the assaillants who decided to use trickery to capture the young wife of the Lord of Béon, the beautiful Margalicte, offering her freedom in return for control of the area.
This proposition was rejected by the Lord of Béon , who challenged the leader in single combat to determine the fate of his wife and that of the valley.
The young Lord, slender and quick, knelt before starting to fight and made a promise to erect a chapel in the Virgin’s honour if he won. After an interminable struggle, with a blow from his axe, the Lord of Béon decapitated tha Norman giant and the soldiers fled.
On that very spot they built the Chapel of Notre Dame de l’Ayguelade, at the northern entrance to Bielle.
Until the end of the last century a pilgrimage to this chapel took place once a year, the procession was led by the first magistrate.

The Feudal Regime in Ossau

From Charlemagne to Louis XIV there was a rather unusual type of feudal regime.
The foundation of the feudal law rested on these maximes :
‘No Lord without a title’
‘No land without a Lord’
which led to an increase in the number of Lords.
Up to the 12th century the Ossalois lived relatively free and independant lives under the Centulle viscounts with whom they had established a charter of freedoms called « for » and they did not want to give this up.
This is why the new squires were unable to exercise an important role in the face of the well organised solidarity of the Ossau people. 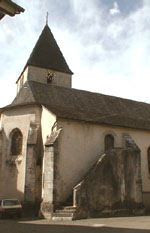 The nomination of the ‘jurat’ (ie an area council made up of representatives from each district/parish) was the most important event in the life of the Ossalois community. In addition to attending the meetings of the Jurade the members of the jurat carried out the functions of the police and the judge, they also administered the wealth of the community.
From 1355 these meetings took place in the ‘Segrary’, a small vaulted room situated in the sacristy of St Vivian’s Church in Bielle, this room was reached by way of a stone staircase.
In the segrary there is a wooden chest with three different locks whose respective keys were kept by :
1. The representative from Bielle (the middle lock)
2. The representative from Laruns (the higher lock)
3. The representative from St Colome (the lower lock)

They would arrive before midday, take part in the mass, then install themselves in the segrary in their allotted places according to a diagram on the wall. The representatives from Laruns presided over the session which began with a prayer led by those from Bielle. Once the session was underway the deliberations were passed by a majority vote. Whoever wished to speak had to be standing and to have his head uncovered, if anyone interrupted a colleague he had to give a bottle of wine by way of forfeit.
The jurade was invested with a moral authority in which all Ossalois had unshakeable confidence, it assured the material well being of the inhabitants and the maintenance of priviledges in the face of the authority of the Lord.

Thanks to Jenny GOODEY for the translation